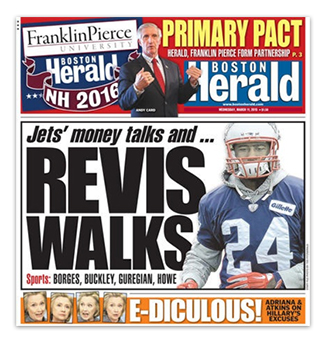 Franklin Pierce University showed up on the front page of the Boston Herald this morning, as the University and the Herald announced an innovative partnership for exclusive coverage of the 2016 first-in-the-nation presidential primaries in New Hampshire.

"This partnership represents an outstanding opportunity for our students," said Franklin Pierce president Andy Card. "It’s also an important service to the American people, as accurate polling and insightful analysis provides people with the critical information they need when picking a president.  New Hampshire has a long history of picking U.S. Presidents, so we’re proud to have our students and faculty covering presidential politics alongside the Herald’s outstanding reporters."

Franklin Pierce University has been active in political polling for many years, and this year’s efforts will again be led by pollster Kelly Myers, a fellow at the University’s Marlin Fitzwater Center for Communications, and president of RKM Research. Myers is considered one of the region’s most respected pollsters, having conducted high quality presidential polls since 1992. In 2008 when many national polling organizations missed on Hilary Clinton’s New Hampshire primary victory, Myers and Franklin Pierce University got it right. 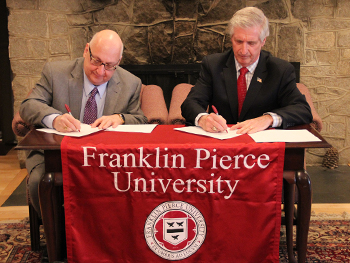 Students at Franklin Pierce — where civic engagement, media coverage, and public policy have long been a focus — will take part in the Herald partnership every step of the way, says Dr. Kim Mooney, Provost of Franklin Pierce University. "This partnership will provide our students, across multiple liberal arts majors, with exceptional real-world learning opportunities and valuable career skills that will serve them well after graduation," said Mooney.

Franklin Pierce students will collaborate with pollsters on the polling process, shadow Herald staffers as they report from the field, interact with candidates and voters during campaign appearances, and contribute their own insights and analysis in the pages of the Herald. Franklin Pierce faculty will also weigh in with their takes on the issues and the campaigns.

Adding to the depth of the project are the political credentials of Franklin Pierce’s president, Andy Card, former White House chief of staff under President George W. Bush. 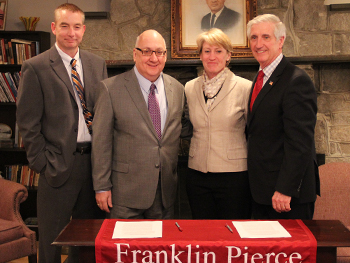 "The Herald has long set a high standard for comprehensive political coverage and adding the expertise of a respected university like Franklin Pierce guarantees the very best content for our multimedia audience," said Herald publisher Patrick J. Purcell.

Herald Editor-in-Chief Joe Sciacca said, "Franklin Pierce students are smart, savvy and committed to learning by doing. This will be an incredible opportunity for them and we can’t wait to join them on the campaign trail."