Franklin Pierce University Librarian Paul O. Jenkins co-edited the book Teaching the Beatles, recently published by Routledge. For Jenkins, this book fulfills his lifelong interest in the band and its relevance to many subjects. Jenkins and his co-editor, Dr.  Hugh Jenkins, professor of English at Union College, networked with scholars who share the same interest in the Beatles in order to gather content. Contributors offer various approaches to teaching courses that center on the Fab Four. These include: “The Beatles Against Machiavelli: Is it Better to Be Loved or Feared?”, “Getting Better All the Time: A Multidisciplinary Exploration of Beatles Mythology,” and “The Beatles as a Business Case Study.”

Other chapters range further afield, describing how to teach Lennon and McCartney as a songwriting workshop, and how the group’s importance expands beyond the music they created.

Co-editor Jenkins said, “I’m gratified that through this book I have been able to turn my lifelong appreciation  for the Beatles into something tangible that can help others who share my same passion for the group.” 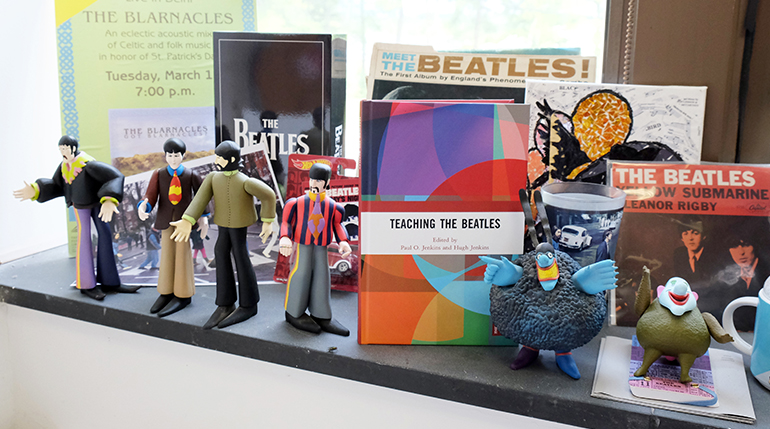 Paul Jenkins received his Master’s in Library Science from the University of Wisconsin-Madison, and has published numerous books and articles during his career as a University Librarian. Jenkins has held his position as University Librarian at Franklin Pierce since August of 2016 and during this time he has designed and taught his First-Year Inquiry course called “The Beatles: Voice of a  Generation.”

“At Franklin Piece University, we are proud to support members of the community who fulfill our mission by seeking creative ways to foster intellectual curiosity while teaching professional and academic skills. Paul Jenkins’ new book, Teaching the Beatles, is an example of scholarship that empowers educators and students to make connections between classroom learning and the world around them,” stated Provost James W. Dumond, Jr.