Gain Skills and Experience for Careers in Law, Government, Politics, Education, and Business

Our connections to the political scene have always been strong, dating back to naming the university after the 14th President of the United States. Franklin Pierce has had university presidents that were New Hampshire governor and White House Chief of Staff.  By beginning your story in Rindge, you will experience, close up, the campaign for the Oval Office that begins in New Hampshire, home to the first-in-the-nation presidential primary.

Study American politics and law, global security and diplomacy, and the political processes of foreign nations. Through the Franklin Pierce/Boston Herald partnership, work with a professional pollster and provide election coverage for the Boston Herald. Develop the background, skills, and connections you need to succeed in law, government, politics, education and business, just as our graduates have done.

You have the opportunity to join Franklin Pierce's chapter of the National Political Science Honor Society if you meet the national requirements for induction.

Join this association that is dedicated to the vision of being the voice of change for the Franklin Pierce community. It is comprised of class officers, class senators, club senators and executive board officers, that meet weekly to discuss topics of community interests and concerns.

The Marlin Fitzwater Center for Communication attracts leaders of national prominence to campus where students have opportunities to engage them in dialog and public policy discussions.

Make Our Nation's Capital Your ClassroomExpand your education through an internship with the Washington Center in Washington, D.C. This internship program will engage you in meaningful coursework and programming, while expanding your professional network.

Sample Career Opportunities
Franklin Pierce graduates have gone on to enjoy careers and internships with such companies as:

Our dedicated faculty are at the heart of providing academic instruction and a Pierce education. Learn more about our knowledgeable faculty and their areas of study. 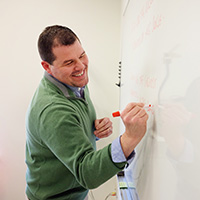 Download a Political Science program sheet to view on-screen or print, or view the College at Rindge Academic Catalog for specific degree requirements and course information.

Request information about your program of interest.