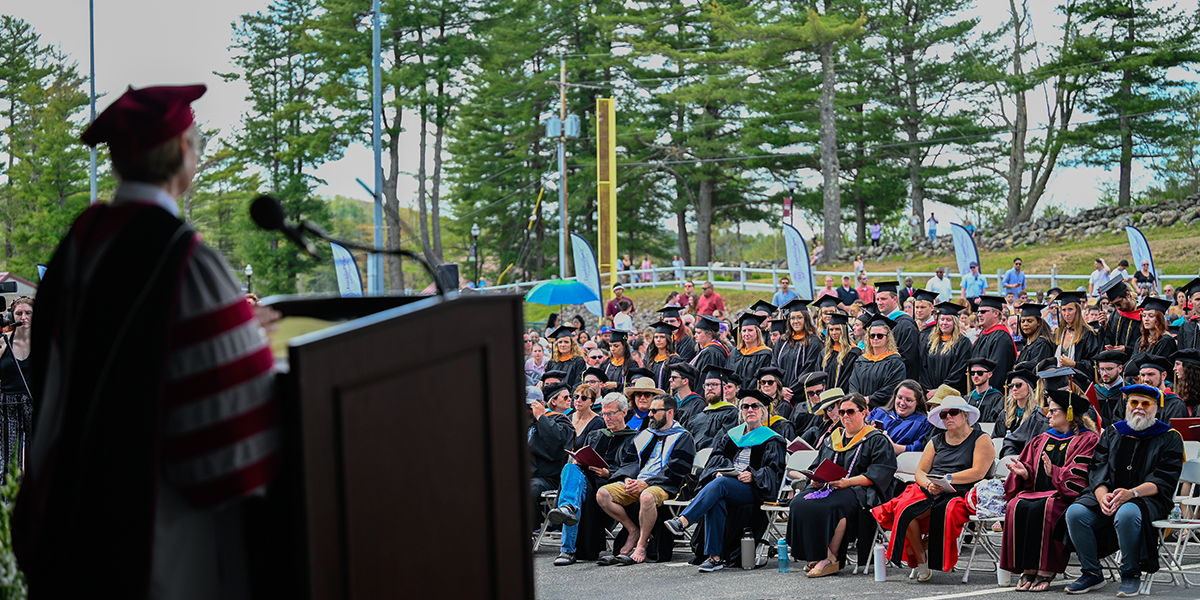 Graduates of the Class of 2022, faculty, staff, and guests gathered on Saturday, May 14, 2022, to celebrate the 57th Commencement at Franklin Pierce University in Rindge, N.H. President Kim Mooney ’83 welcomed all the graduates as well as families, friends, alumni, members of the Board of Trustees, honored guests, and those viewing the ceremony via livestream.

“Almost all of you graduating today, started at Franklin Pierce during what we now refer to as the ‘pre-Covid’ world,” said President Mooney. “On many levels, you represent a bridge to the past and to the future. Your time as students at Franklin Pierce will forever be a melding of ‘what was’ with ‘what changed’ but you are poised now to shape ‘what will be’ for all of our futures.”

Journalist and media ethicist Richard T. Griffiths was also awarded an Honorary Doctor of Humane Letters degree. Griffiths currently volunteering his time to focus on government access, free speech, and continuing education for journalists as President Emeritus of the Georgia First Amendment Foundation. Prior to his retirement in 2017, Griffiths held the position of Vice-President and Senior Editorial Director for CNN, responsible for global editorial quality control. During his nearly 26 years at CNN, Griffiths oversaw “the Row,” the global network's editorial quality control operation. Griffiths has consulted on and taught journalism ethics, storytelling, investigative reporting, media trust building, and editorial management in the United States, Australia, Jamaica, Indonesia, the Philippines, Switzerland, and Poland.

“This is indeed a high honor,” said Griffiths. “Thank you and congratulations fellow graduates! I am so proud to be a Raven with you!”

Celebrated author and memoirist Joyce Maynard was awarded an Honorary Doctor of Humane Letters degree. A native of New Hampshire, Maynard began publishing her stories in magazines when she was thirteen years old. She first came to national attention with the publication of her New York Times cover story, “An Eighteen Year Old Looks Back on Life”, in 1972, when she was a freshman at Yale University. Since then, she has been a reporter, syndicated columnist, and a regular contributor to NPR and national magazines including Vogue, The New York Times Magazine, and many more. A New York Times bestselling author, she has penned 18 books, two of which were adapted for motion pictures.

“Go live your story,” urged Maynard. “But also live it knowing it is important, it is valuable. There is somebody else out there who when they hear your story will feel less alone with their own. And it is not the heroic moments that are going to bring your reader to that, it’s the places where you are brave enough, fearless enough, and shameless enough to tell the truth.”

The Honorable Walter R. Peterson Citizen Leader Award was created to honor the late governor and second president of Franklin Pierce and his lifelong commitment to public service and higher education in the state of New Hampshire. This year’s award was presented to James T. Brett, President and Chief Executive Officer of The New England Council, the nation’s oldest regional business association. Prior to joining the Council, Mr. Brett served for 15 years as a member of the Massachusetts House of Representatives. A lifelong champion for people with disabilities, in 2022, President Joe Biden appointed him to serve on the President’s Committee for People with Intellectual Disabilities, a post he previously held under Presidents George W. Bush and Barack Obama. In 2016, Congress appointed Mr. Brett to the National Council on Disability, and he currently serves as Vice Chairman.

“Like Governor Peterson, Mr. Brett’s life and career has been defined by public service,” said President Kim Mooney ’83. “A former Massachusetts state legislator and renowned community leader, James Brett is a tireless advocate for people with intellectual and developmental disabilities.”

The University was proud to confer 519 degrees, including doctoral, master’s, bachelor’s and associate’s degrees. Among the students recognized were those that completed their degrees early, in December 2021, highlighting the University’s many paths, shared goals ethos, including valedictorian Viridiana Vasquez Kloss. Originally from Veracruz, Mexico, Viridiana majored in Management in the College of Business while also earning a minor in Marketing. Since completing her degree in December 2021, she has signed her first professional soccer contract and is currently playing professional soccer for Puebla W FC in Liga, Mexico.

“Franklin Pierce is a home for everyone, there are no labels or preconceptions and that is something that makes FPU unique and worthy,” said Kloss in her address. “FPU tries to bring out the best in us and has helped us get to this point in our lives- it has prepared us for what will come next. Thanks to FPU, we know that it will not be easy, but we know that it will be worth trying as many times as necessary until we achieve our goals.”

Regardless of the degree earned or timeframe in which it was achieved, today’s ceremony celebrated each Raven’s unique story and their individual path to success.

“Our collective hope for you,” closed President Mooney, “is that you wake up every morning with opportunities to honor what it means to be a Franklin Pierce graduate.”

A recording of the Commencement Ceremony and photos from the event will be available for viewing at franklinpierce.edu/commencement.