If a building needs to be evacuated, the Fire Alarm will sound, or you will be notified by FPAlert by text in case of an alarm failure. If alerted, leave your building in an orderly fashion and head to the appropriate assembly point listed below.

For people who are mobility impaired (those who use a wheelchair): When the alarm is activated,
people using wheelchairs should either stay in place or move to a safe place and wait for assistance from a member of the University staff or other trained emergency personnel. Contact Campus Safety at (603) 899-5555 for additional assistance and to relay information of your location. If assistance can be offered by others evacuating, assist anyone that may have need.

People who are Mobility Impaired (those who do not use a wheelchair): People with mobility
impairments who are able to walk independently may be able to navigate stairs in an emergency with minor assistance. In an actual evacuation, these individuals may choose to wait until heavy traffic has cleared before attempting the stairs. Elevators can be used only if authorized by emergency personnel, but may never be used in the event of fire or structural damage. If assistance can be offered by others evacuating, assist anyone that may have need.

People who are Deaf or Hard of Hearing: Many areas and rooms in University buildings are equipped with fire horns and strobe lights that simultaneously sound an alarm (auditory) and flash strobe lights (visual). Although this system is intended to alert deaf and hard of hearing individuals, they may not notice or hear emergency alarms and may need to be alerted to emergency situations. If assistance can be offered by others evacuating, assist anyone that may have need.

If there is an ACTIVE SHOOTER on campus, remember RUN, HIDE, FIGHT:

RUN: If you have a clear and safe path away from the shooter, RUN from the building or location to safety.

HIDE: If you DO NOT have a safe pathway out of the building:

FIGHT: If you HAVE NO OTHER CHOICE and are confronted:

If you witness or experience VIOLENT or CRIMINAL BEHAVIOR:

If a CIVIL DISTURBANCE or RIOT is in progress:

If you are involved in a HOSTAGE SITUATION:

In the event of a FIRE or FIRE ALARM in or near your area:

If there is a MEDICAL EMERGENCY or INJURED PERSON in your area:

For after-hours emergencies or if you get a voicemail at Facilities, please call Campus Safety at x5555 or (603) 899-5555. DO NOT LEAVE A VOICEMAIL FOR AN EMERGENCY.

If an ELECTRICAL POWER FAILURE occurs in your building or on-campus:

If your area experiences FLOODING:

If your area experiences a No Water or No Heat:

If someone is caught in a STUCK ELEVATOR:

If someone around you is experiencing a MENTAL HEALTH CRISIS or is THREATENING SUICIDE:

If a student is contemplating suicide or experiencing a mental health crisis:

If you encounter a DANGEROUS or SUSPICIOUS PERSON:

If you encounter a SUSPICIOUS ITEM or PACKAGE:

If there is a TORNADO or SEVERE WEATHER in the area:

The University will use the following components to issue WARNINGS for emergencies:

Outdoor Warning System: The University’s outdoor warning system issues tone and voice messages in the event of an emergency which will be heard campus-wide by persons outside.

FPAlert Text Message: Students, faculty, and staff who register for the alerts will receive SMS messages on their mobile phones when this system is activated.

Voice Message Broadcast: A message may be sent to the voicemail boxes of all campus telephone extensions.

University Website: The University website will be updated with information and instructions during an emergency situation as is possible to do so.

Person-to-Person Communication: Campus Safety or other stakeholders may deliver instructions to persons in their designated buildings/departments.

Shelter-in-Place: Shelter-in-Place means to take shelter within the building you are in, preferably in a room that can be secured if necessary. Examples of situations in which Shelter-in-Place might be used include: severe storms, such as tornados; extreme life-threatening temperatures (e.g., cold or heat); public disturbances, such as a demonstration that has escalated to a violent level; explosions, whether intentional or accidental; and chemical or biological contaminants released accidentally or intentionally into the air.

A Shelter-in-Place order may be used in conjunction with instructions to Seek Shelter. For example, “Seek Shelter and Shelter-in-Place”. Remain vigilant, additional safety measures may be communicated in a Shelter in Place scenario. Remain until the all clear is given.

Secure-in-Place (Lockdown): An alert to “Secure-in-Place” or for a “Lockdown” means that there is an immediate threat present on campus. Remember RUN, HIDE, FIGHT. If you can safely leave a dangerous situation outside or in a facility, run to safety and leave. If you cannot or if you do not know, and you’re indoors, move to a room that can be secured. Shut and lock all doors and windows. Turn off lights and silence cell phones. Barricade the door from the inside to prevent someone from entering. Move away from doors or windows that would provide a line of sight to see that someone is in a room.

If you encounter a situation in which FIGHTING is the only option, FIGHT. Attack a shooter as a group if possible. Make improvised weapons out of objects. Aim for eyes and the soft tissue areas of the throat. This scenario would be used in the case of an active shooter on campus.

If you are outside and not in danger, take the quickest route that you can, safely away from and off campus or to a known safe location.

Suggested locations include Emma’s at the end of Mountain Road and down to the entrance of campus off University Drive. 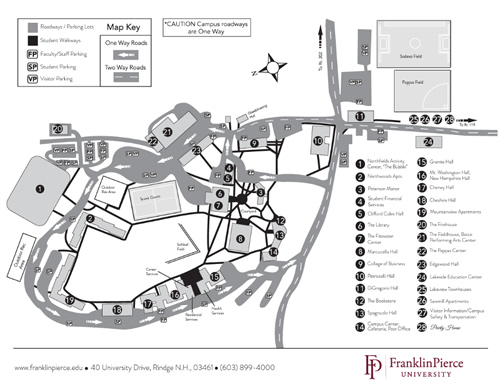