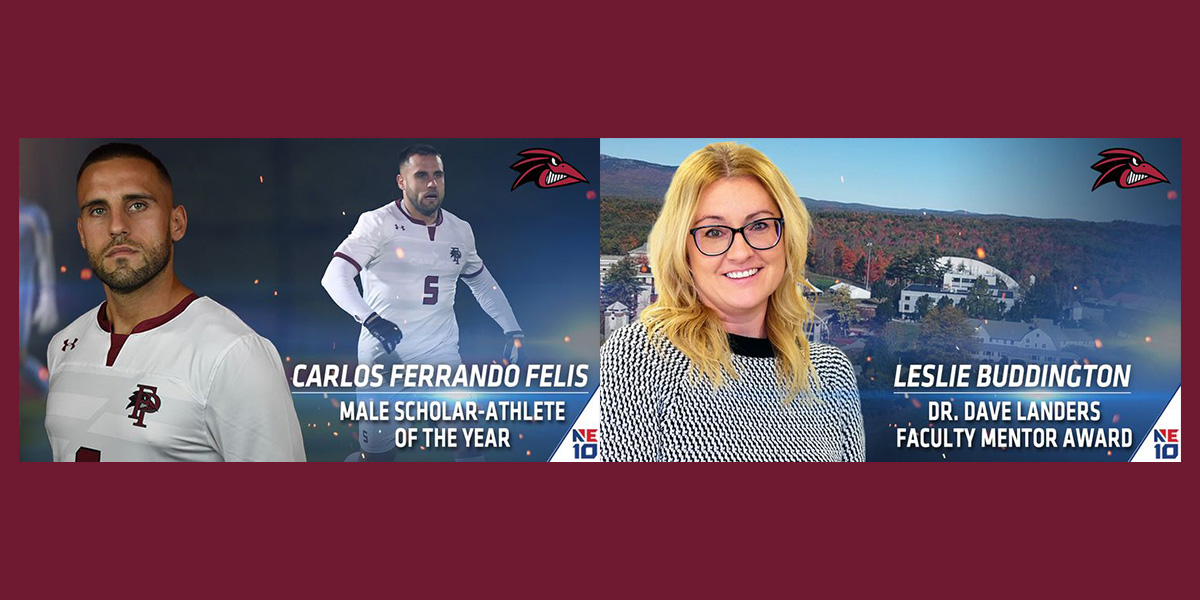 The Northeast-10 Conference put a bow on 2021 - 2022 on Thursday night, as the league hosted its annual awards show, which was once again held in a virtual format. It was a banner night for the Franklin Pierce University Department of Athletics, as the Ravens took home two of the NE10’s five major awards. Men’s soccer graduate student Carlos Ferrando Felis (Tavernes de la Valldigna, Spain) was named as the NE10 Outstanding Male Scholar-Athlete of the Year, while Dr. Leslie Buddington was selected as the recipient of the Dr. Dave Landers Faculty Mentor Award. In addition, Franklin Pierce posted an all-time best finish of fourth in the President’s Cup.

Felis is the first Raven in over a decade to take home one of the league’s Scholar-Athlete of the Year awards, which is the league’s premier award recognizing both academic and athletic prowess. Per the NE10, the awards are presented to “a male and a female graduating student-athlete who have each exhausted their athletic eligibility and who have exhibited sustained excellence in both academic achievement and athletic competition.” Nominees are required to carry a minimum grade-point average of 3.3, and the award is voted on by institutional faculty members and athletic administrators.

Felis is just the second Franklin Pierce student-athlete to ever win the award, as he joins baseball’s Bryan Duplissie, who was honored in 2005 - 2006. Felis is only the third men’s soccer player in NE10 history to take the award, which was established in 1999 - 2000.

The award capped a year full of hardware for Felis, who has been honored numerous times in the last seven months for his work both on the field and in the classroom. In November, he took home his sport’s most prominent national award for academics and athletics, as he was named Academic All-America Team Member of the Year by the Collegiate Sports Information Directors of America (CoSIDA). Shortly thereafter, he collected men’s soccer Scholar-Athlete Sport Excellence accolades from the NE10, in conjunction with his selection to the Academic All-Conference Team. Meanwhile, he was also NE10 Player of the Year, an All-NE10 First Team pick, an All-Region First Team honoree and an All-America First Team selection on the pitch this fall for the Ravens.

“It has been an honor to represent Franklin Pierce University, and I couldn’t have reached this point without unconditional love and support from the important people in my life,” said Felis in his acceptance speech, before thanking his coaches, teammates, family and friends. “It was a privilege to compete in the NE10 Conference and represent the school with dignity.”

For her part, Dr. Buddington became the second Franklin Pierce faculty member in three years to take home the Faculty Mentor Award, which was established in 2017. Per the NE10, “the Dr. Dave Landers Faculty Mentor Award recognizes a faculty member from a conference institution who has supported the efforts of student-athletes in achieving their academic goals.” The award was created by the NE10 Student-Athlete Advisory Committee (SAAC) and is named after the longtime professor and faculty athletic representative at Saint Michael’s. The award is voted on by a committee made up of NE10 SAAC members.

Dr. Buddington is the second Franklin Pierce faculty member to win the award, joining Dr. Laura Christoph, who was honored in 2020. Franklin Pierce’s pair of honorees is second to only Saint Michael’s, which won the first three editions of the award.

An Assistant Professor of Social and Developmental Psychology, Dr. Buddington serves as faculty mentor to Franklin Pierce’s football team. When Franklin Pierce’s institutional SAAC highlighted a need for mental health education and resources coming out of the COVID-19 pandemic, Dr. Buddington helped spearhead a Faculty/Coach Mental Health Panel in fall of 2021, where various University faculty/staff members spoke openly about their own struggles with mental health and well-being. The panel helped create a vulnerable atmosphere and normalized speaking out about mental health. Dr. Buddington has also helped coordinate research opportunities for numerous student-athletes in the fields of mental health and sport psychology.

“It is such an honor to be the recipient of the Dr. Dave Landers Faculty Mentor Award this year,” said Dr. Buddington, in her acceptance speech. “It was actually my first time being a faculty mentor, and I had no idea how much fun I was going to have… It was the best parts of teaching, which is building relationships with students, trying to figure out what the problem is, and what the solution is to that problem.”