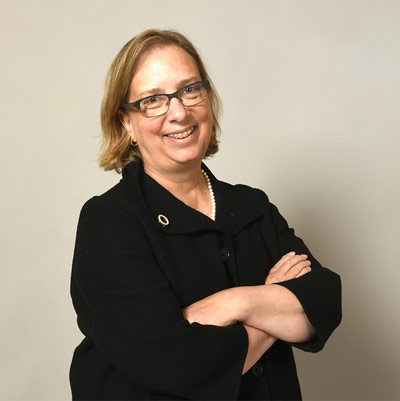 From the first time she met him, Marlin Fitzwater has said that he wanted the Center to be more than a name on a building, and that was her cue.

In the summer of 2002, only a couple of months after its dedication, Dr. Kristen Nevious joined the The Marlin Fitzwater Center for Communication as a staff member and was named director in 2004.

Her first task as director was to frame its mission: to engage intellects, challenge perspectives, teach skills and help people find their voices in the public discourse that is essential to the health of our democracy. Since becoming Director, she has established numerous programs and organizations including the Pierce Media Group, The Fry Lectures, Franklin Pierce University Polling, The Presidency and the Press, PoliticsFitzU, and she produced a Forum on Civility in Presidential Election Discourse with the Newseum in Washington, D.C. Dr. Nevious is also a producing partner for IndieLens Pop-Up.

Dr. Nevious is a founding member of the Granite State News Collaborative. Through the GSNC, she has created opportunities for FP interns to work remotely on top video and podcast internships with New Hampshire Public Broadcasting and Citizens Count.

In 2018, she was named the Journalism Educator of the Year by NENPA.