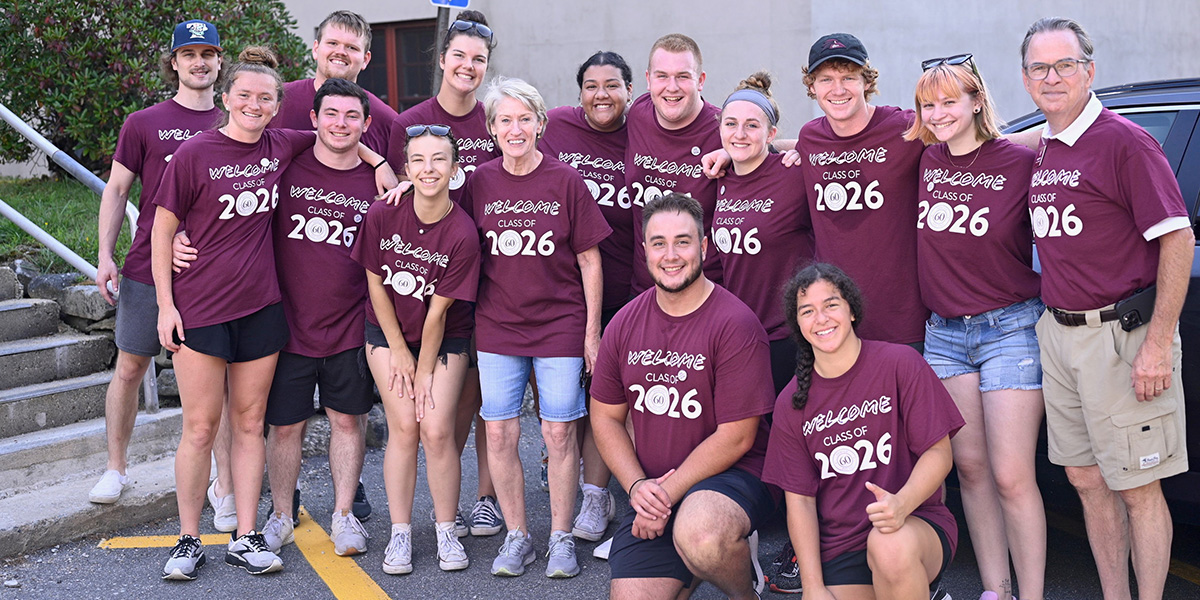 As Franklin Pierce University marks its 60th year, the institution’s newest class arrived on the Rindge Campus on Saturday, August 27. Greeted by students, and members of the University’s faculty, staff, and administration, the Class of 2026 hails from 24 states and 10 countries from around the globe.

For vehicles arriving at the intersection of University Drive and Mountain Road, affectionately referred to as Four Corners, President Kim Mooney ’83 made a point of personally welcoming each family to Raven Nation. License plates from as far away as Minnesota, Pennsylvania, and Ohio were spotted on cars packed to the brim, with families being escorted to drop-off points to unload their belongings with the assistance of peer leaders and staff.

Celia Martinez arrived from Manchester, N.H. and plans to study veterinary medicine as an undergraduate, taking advantage of the University’s graduate pathway program with St. George’s University (SGU) School of Medicine or School of Veterinary Medicine in Grenada, West Indies. “I am very thankful to the University for making my transition to college so seamless, including the staff in Financial Services who worked with to make my college education affordable and accessible.”

President Mooney even got in on the fun, helping to move in students. A move-in weekend tradition, she stopped by her freshman residence hall room, Mount Washington 273, to greet this year’s occupants, Jill Hertl and Cassidy Anderson, before making her way to Cheshire Field for the community cookout, put on by Sodexo.

The 346 newest Ravens, including freshmen and transfer students, make up a cohort with diverse backgrounds, interests, and academic focus. The most popular declared undergraduate major is Health Science, a testament to Franklin Pierce as a leader in the allied field as the University continues to expand its graduate programs through new and innovative delivery models.

Beyond academics, more than 50 percent of the incoming class are recruited student athletes. Their impact will undoubtedly be felt on and off the field, and includes members of the Raven Marching Band, who are currently preparing for their debut performance at the first home football game of the season on September 3.

Tyler McDonald, a junior transfer student from Haverhill, MA, is excited to start his Franklin Pierce journey. The baseball pitcher was drawn to the campus after hearing about the positive experience his friend, Hunter Wilichoski ’25 has had at FPU. “I heard a lot of great things, and when I visited campus, I was drawn to the great atmosphere, the academics, and the chance to be part of a competitive baseball team.”

Tyson Springer, from Youngstown, Ohio, made several visits to the Rindge Campus, while doing his college search. “I looked at a lot of colleges, but from my first visit to Franklin Pierce, it felt like home.”

Following move-in, President Mooney addressed the Class of 2026 and their families under the large orientation tent on Cheshire Field. “As a community of educators, we share an interest in your student that extends far beyond the classroom and academic performance; far beyond the playing fields and athletic performance; far beyond the leadership roles they may choose to accept as students here,” she said. “We understand and embrace the awesome responsibility, not only to help shape your students’ lives while they are at Franklin Pierce, but to foster in them the personal goals and character that will shape their futures, but by default the futures of the people they will meet, the places they will work, and the communities in which they live.”

Returning students will move in on Sunday and Monday. Classes will begin on Tuesday, August 30.